Aggression is a common, but treatable symptom of HD. It can be treated with medications and with changes in how people interact with someone with HD.

Acts of aggression in people with HD are brought on by having lost the ability to inhibit, or stop, their behavior when they become angry or frustrated. The abnormal HD protein directly damages the part of the brain responsible for control over impulses and activation of behavior. Normally, there is a “gate” in the brain that allows an impulse to become a behavior. The gate is opening when it’s appropriate to act and closing when it’s not in your best interest to act. For the person with HD, it’s like the gate is constantly open (disinhibition), constantly closed (apathy), or very inconsistent (unpredictable).

Awareness of how their thinking has slowed down or changed is limited. However, they can easily become frustrated when they can’t explain this to themselves or others. The combination of frustration and disinhibition results in irritability. Lack of understanding of this frustration can escalate into aggression.

If left untreated, acts of aggression may:

Spectrum of Irritability and Aggression

There is no arguing that addressing HD related aggression is a very hard task.  It’s emotionally difficult, socially complex, and involves risk.

Understanding the severity of aggression can help the people who live with the person with HD understand the potential risk and make judgments about what to do next.  There is not good data about what kind of symptoms are cause for immediate action and which symptoms are less risky.  Because of the problem of impulsivity in HD, we can’t predict what will happen next in when someone with HD becomes irritable. When HD related physical aggression occurs, however, our experience tells us that it will happen again unless something changes. 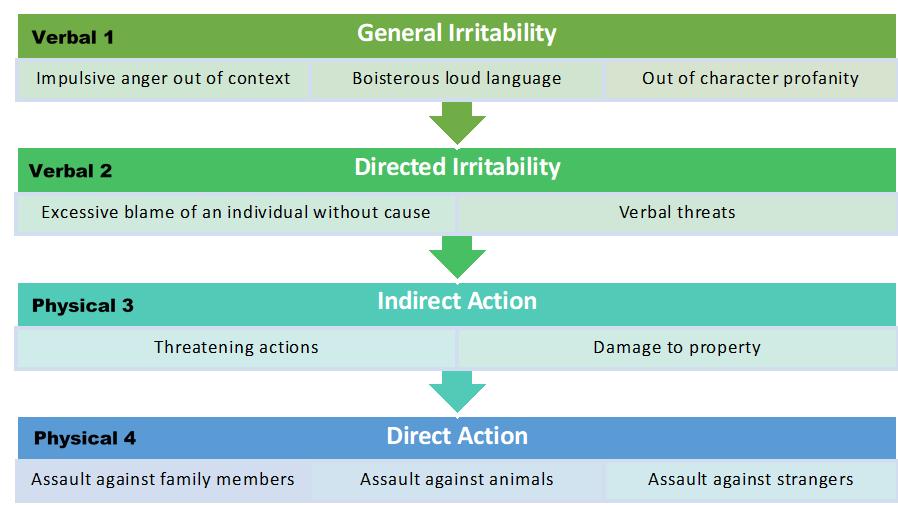 How We Talk About Irritability and Aggression Matters

The following words describe HD related behavior. It’s helpful to understand which of these terms best describe the person you know with Huntington's disease.

Anger is an emotion that motivates and energizes us to act. It is a natural response when personal rights have been violated, or a person has been wronged. It can be a healthy and reasonable response, with positive consequences.

Irritability is a prolonged emotional state or mood in which a person can be short-tempered or easily annoyed. Often, it results from being tired, stressed, or pushing ourselves beyond our limits. It rarely results in positive consequences.

Aggression is motivated by an intent to cause harm to another person who isn’t seeking harm. In other words, a fight between two people where only one wants to fight. It is often verbal, but is never constructive.

Violence is an extreme type of aggression where someone tries to seriously injure or kill another person.  It can be impulsive or planned.

Agitation is a state of psychological and physical restlessness. It can include pacing, hand-wringing, gesturing, hostility, excitement or distress. Understanding the difference between aggression and agitation in people with HD requires understanding the circumstances around the behavior, taking into consideration the demands of the environment and the stressors that could trigger the behavior.

There are descriptions of HD related aggressive behavior in the news and on social media attention. However, it doesn’t mean that aggression will happen in your family. Knowledgeable medical care and good planning for the changes can reduce the risks.

Steps for Reducing the Risk of Aggression

An HD Reach social worker can work with you to create a plan that is:

For more information about how to handle aggression, speak with an HD Reach social worker or a member of your medical team about developing a safety plan, and other strategies you can put in place.